2021 was an unprecedented year for startups, venture capital and the private market. Globally, investors poured $621 billion into startups, up 111% from 2020.1 Half of that record raise landed in U.S. companies, which soaked up $311 billion.2 This strong fundraising environment minted a record number of unicorns (private companies valued at $1 billion or greater) and allowed startups across many sectors to raise the capital they need to fund long-term growth.

But 2022 is a new year. After a long bull market, the combination of inflation, rising interest rates and the COVID-19 Omicron variant incited volatility in the public markets. Publicly traded technology stocks have collectively struggled to start the year, with the NASDAQ (a widely used barometer for tech) declining 10% in January.3

Meanwhile, in the private market, investors, shareholders and companies want to know what this shakeup in the public markets might mean for them.

What’s clear is that even as the lines continue to blur between the public and private markets, the turbulence that has jostled public markets so far in 2022 has yet to light up the ‘fasten seatbelts’ sign in the private market through the end of January.

To start, primary fundraising appears healthy, with VC’s investing $31.97 billion into U.S. startups in January, a slight increase from December.4

The price investors are willing to pay for privately held company shares dipped only slightly in January (see Indication of Buy and Sell Interest table below), likely a spillover effect from the tech sell-off in the public markets.

Shareholders remained bullish, with the price at which sellers are willing to part with private market shares edging up just slightly since the start of the year.

“As a result of the strong growth in private markets over the past few years, private market investors may also be viewed as public market investors. The result is investor sentiment is highly correlated between the two,” said Charlie Grimes, Managing Director and Head of Capital Markets at Forge. “In recent months, as volatility hit the public markets, we’ve seen more shareholder activity on the platform as employees and early investors are concerned about extended liquidity timelines. Later stage investors sense buying opportunities because they tend to be more long-term, focused on the next 3-5 years and not the next 3-5 Fed meetings.”

This is Forge Global’s February 2022 Private Market Update, which offers investors, shareholders, and issuers a lens into our comprehensive private market platform. With over 470,000 members, Forge Global is a leading private securities marketplace for investors to access timely market data, research on the trading trends of private companies, and liquidity to conduct transactions.

Toward the end of 2021, as inflation and rising interest rates weighed on the public market, we started to observe similar sentiment on the Forge platform - seller interest outpaced buyer interest for the first time in many months, with engagement on both sides driven by market dynamics and Forge marketing. With public market sentiment improving, the trend reversed somewhat in January.

While we cannot predict future pricing and performance, we believe the gap between public-private sentiment has narrowed, and this may present market participants with potential opportunities to pick entry / exit points to the private market.

As demonstrated in the chart below, there has been a steady increase in seller interest in the last twelve months (indexed against Jan 2021) on the Forge platform, whereas investor demand has been more steady with a sharp decline and partial correction between late Nov 2021 and Jan 2022. 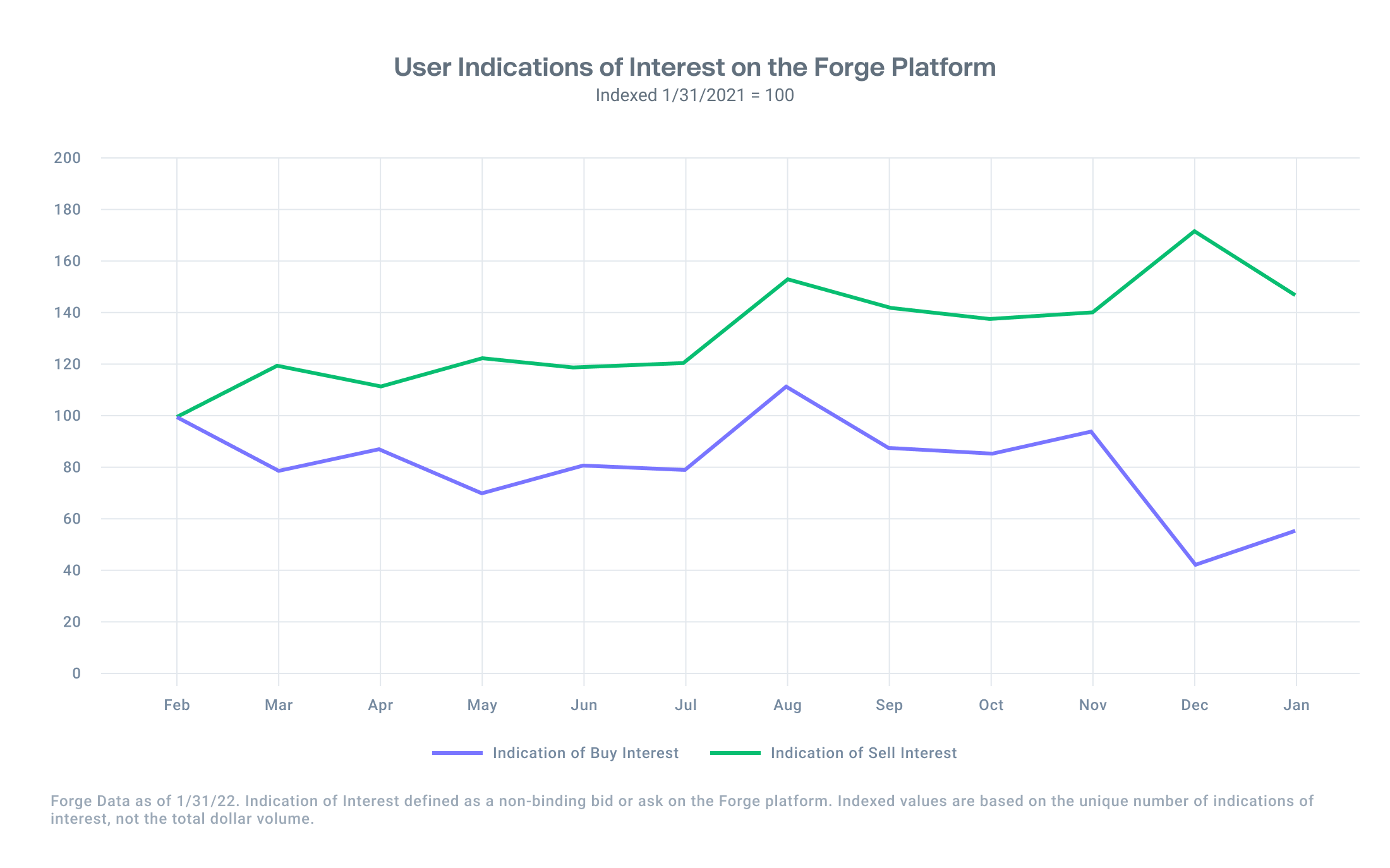 The private market is beginning to see some downward pricing pressure, but not to the same extent as the public markets. Even as some stakeholders think that startups may have to work harder to attract new rounds of funding at increasingly higher valuations, startups are in large part well-capitalized after a lucrative 2021 and there’s still plenty of dry powder that must be deployed by VCs.

Still, sustained public market volatility may cause startups to delay IPOs, creating an increased need for private companies to offer shareholder liquidity in order to recruit and retain employees, and to manage investors on their cap table. For investors, modestly softening prices may present attractive entry points to the private market asset class.

While technology stocks have struggled to start the year, the impact has been most acutely felt by newly public companies. The Renaissance IPO ETF outperformed broad benchmarks for most of the last two years, but as tech stocks sold off in Q4 2021, its returns began to lag the NASDAQ and the S&P 500. 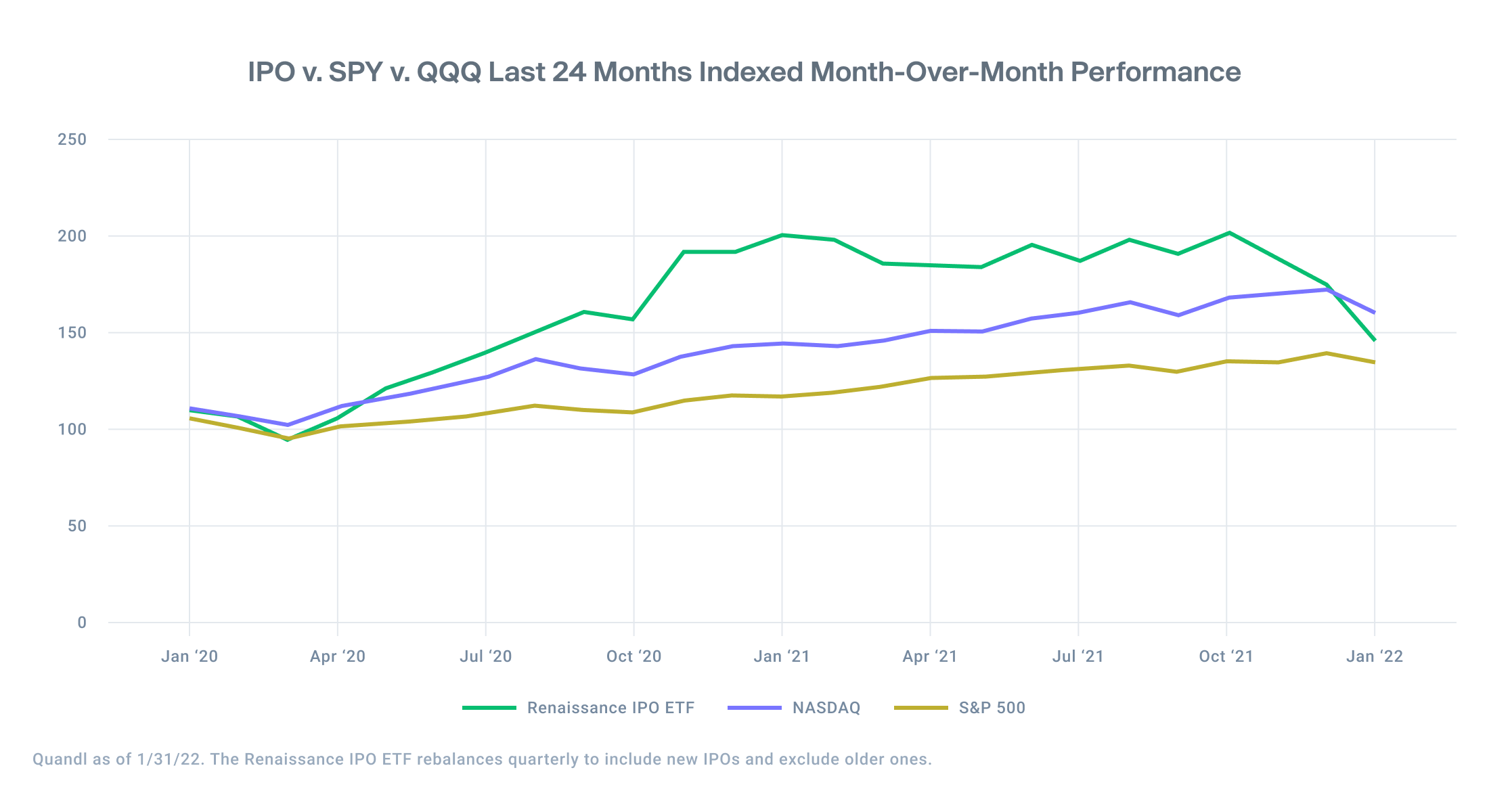 The private market paints a different picture, as the opportunity for outsized returns may increasingly be shifting to the period before a company goes public. In the aggregate over the last 6 months, companies covered on Forge Intelligence offered strong returns – an average of 60.1% – if investors purchased stock at the last private round price. Investing in the IPO of the same group of companies would have resulted in a –26.5% loss by comparison. 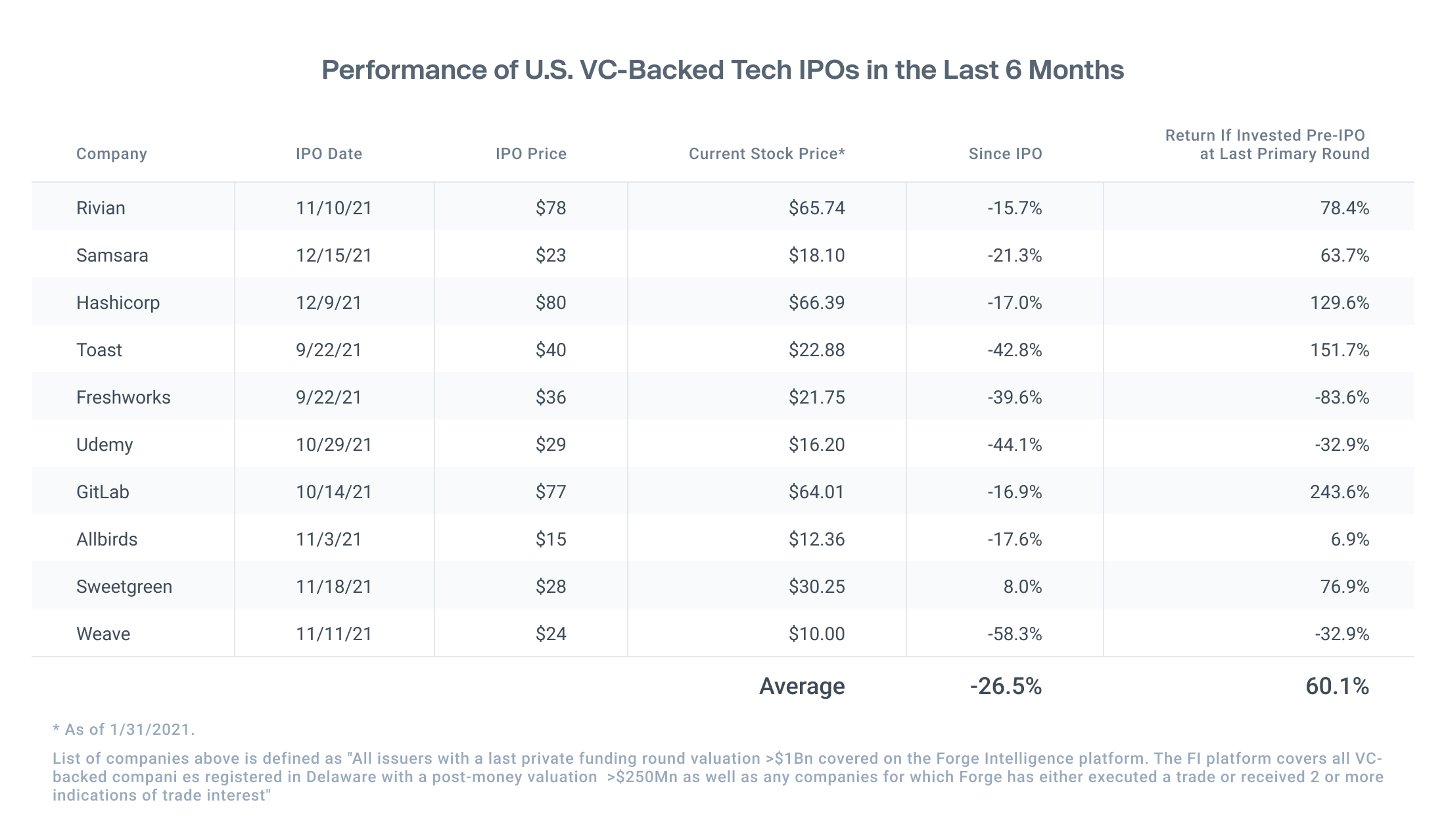 Investors continue to put capital to work by funding a wide range of U.S. startups and sectors. The largest 10 deals over the last 60 days are spread across biotech, SaaS, logistics, entertainment, crypto, fintech, and more. 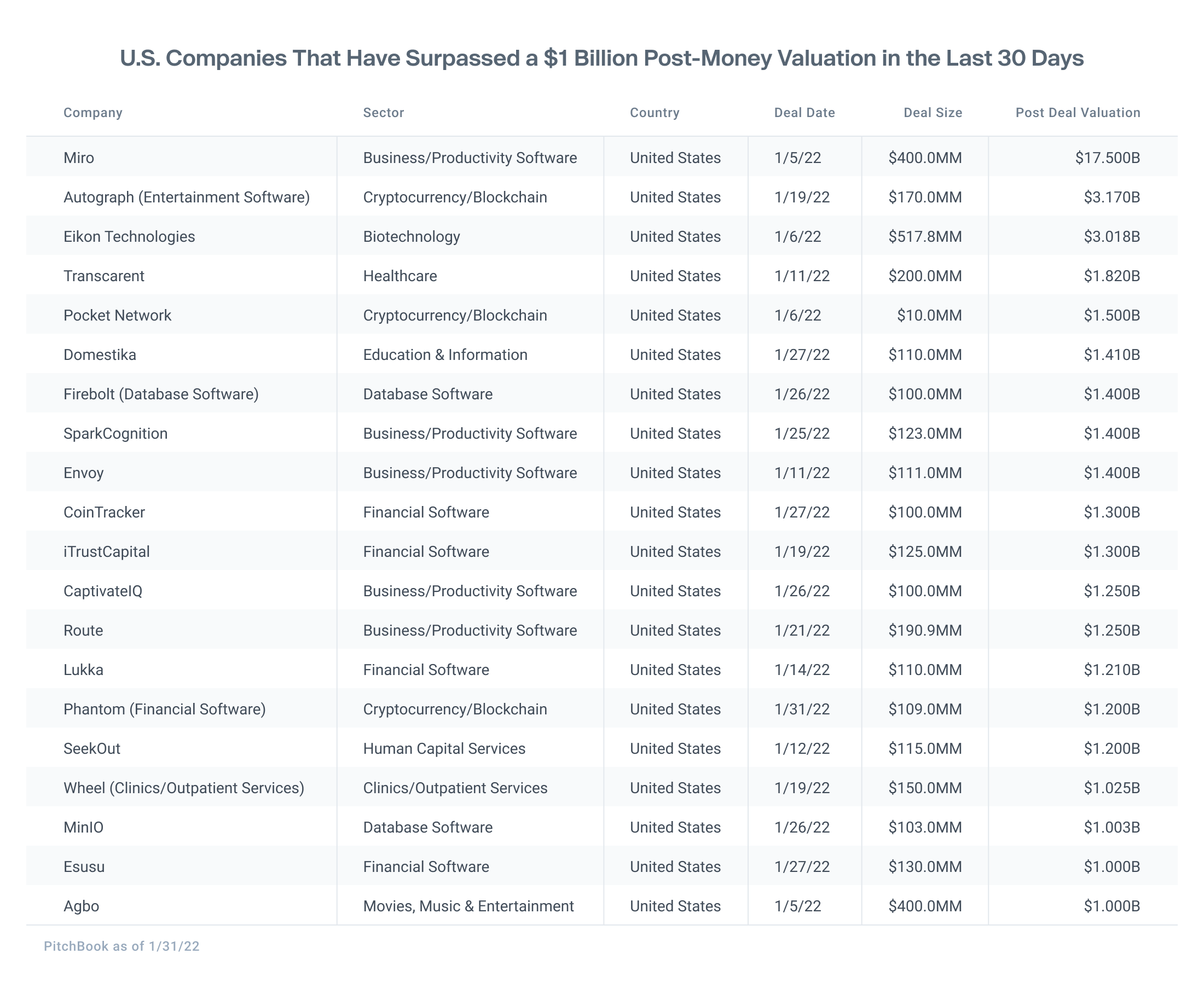 Globally, the private markets are now home to nearly 1,000 unicorn companies with a cumulative market cap of over $3 trillion, according to CB Insights. And as 2021 minted a record number of private companies whose valuation exceeded $1 billion, exits lagged considerably – creating a large investable universe in the private market, especially in the U.S. 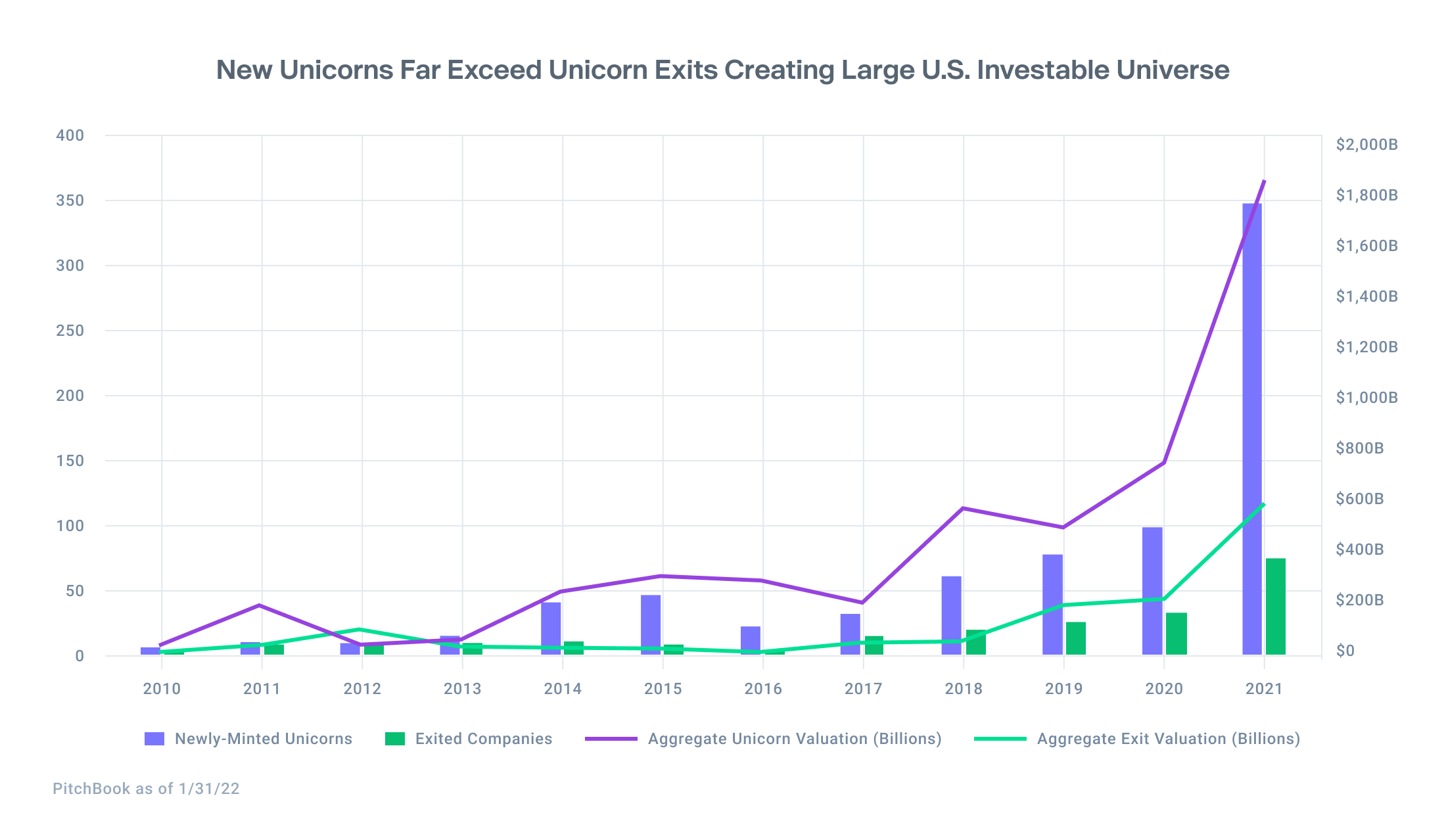 While 2022 will no doubt bring its fair share of SPACs and IPOs, market volatility may cause some companies to rethink their timeline and delay going public, accentuating the larger trend of startups staying private longer.

6 List of companies is defined as all issuers with a final private funding round valuation >$1Bn covered on the Forge Intelligence platform. The FI platform covers all VC-backed companies registered in Delaware with a post-money valuation >$250 million as well as any companies for which Forge has either executed a trade or received 2 or more indications of trade interest.

The information and material presented in this article is provided for your informational purposes only and does not constitute an offer by Forge Global, Inc. Forge Securities LLC or any of its affiliates (collectively, "Forge") to sell, or a solicitation of an offer to buy any securities and may not be used or relied upon in connection with any offer or sale of securities. An offer or solicitation can be made only through the delivery of final offering document(s) and purchase agreement and will be subject to the terms and conditions and risks delivered in such documents.

This article does not constitute an offer to provide investment advice or service. Registered representatives of Forge Securities LLC do not (1) advise any member on the merits or prudence of a particular investment or transaction, or (2) assist in the determination of fair value of any security or investment, or (3) provide legal, tax, or transactional advisory services. Securities referenced in this article may be offered by Forge Securities LLC a Registered Broker Dealer, Member FINRA/SIPC.

Forge Securities LLC is a wholly owned subsidiary of Forge Global, Inc. Certain affiliates may act as principals in such transactions.